02 Oct A Centennial Year of Scouting 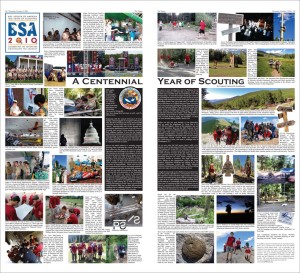 2010 marks the 100th Anniversary of Scouting in America and, throughout our country, scouts of all ages from many generations are celebrating. The scouts of Troop 888 have been doing their fair share as well – and it’s still not over!

Beginning with the annual observance of Scout Sunday, which happens to recognize February 8, 1910, the BSA’s birthday, the troop attended 10:00 AM Mass at Our Lady Star of the Sea Catholic Church. Although this year’s Scout Sunday was particularly important because of the 100 Years of Scouting and several Troop members receiving their religious emblem, it was also the Sunday parishioners dedicated our brand new Parish Hall. That morning, Scouts got to lead the parish youth and other churchgoers into the new hall where all the youth signed their names upon a special wall to commemorate the occasion.

Just as our nation observes a scouting program growing older, watching the scouts of our troop grow older over the period of a year is a unique experience and a privilege to be a part of. It never fails, that just as our troop is becoming a well-oiled machine the process begins all over again, as each spring a whole new crop of Webelos crossover from the Cub Scout Pack to the Boy Scout Troop. This is a time of chaos and uneasiness for the scouts and their leaders as everyone learns their new place of responsibility. Those who were the new scouts from last year are becoming adapted to the traditions of scout life, and the older, seasoned scouts are put forth by an election of their peers to become the next generation of our leadership corps. It has been our custom to hold patrol elections at summer camp and, by then, you can see the new scouts getting the hang of it; working together as a patrol to accomplish duties such as setting up their dining fly, as well as camping, cooking and eating as a unit – they’ve grown from being homesick little boys on their first weekend camping trip to confident delegates of their Patrol planning our next calendar year of events.

Because we were sending two crews to Philmont Scout Ranch in Cimarron, NM later this summer, nearly all of this year’s monthly trips had something to do with backpacking – so even the younger Scouts got a taste of it, including the trail food. For the older Scouts, it meant hiking under full pack with all of our gear for the trip; including clothes, tent, food, and water. To name just a few of the places we’ve hiked this year: Stone Mountain in GA (we went snow tubing too), Kings Mountain State Park and National Military Park, Devils Fork State Park (some went swimming), and Table Rock State Park. Did I mention we did some backpacking? We hiked in all sorts of terrain and weather – from rolling hills to dreadfully steep inclines in weather ranging from icy-cold, wet hail storms to sticky, hot humidity – so thick we were literally hiking within clouds of it!

Before our trip out west though, it was imperative that we made the pilgrimage by Troop Bus to Ft. A.P. Hill in Virginia – home of the Jamboree, but not just any Jamboree, this was the 2010 National Scout Jamboree – a once in a lifetime Jamboree. It was a time and a place that would not come again in any of our lifetimes and therefore a must-do event on our Troop calendar. In addition to the Jambo visit, we saw George Washington’s Mount Vernon Estate and Gardens, the Udvar-Hazy Center, and made a midnight tour to Washington, DC!

As we now enter the fall season, there’s still a few months worth of adventure left in this Centennial Year of Scouting and Troop 888 is not sitting at base camp letting it go by – we have much more to do and here’s a brief overview of some of the epic trips our Scouts have planned for the upcoming year: surfing and sea kayaking along the NC coast, winter camping on the Canadian border at Northern Tier High Adventure Base, hiking on the Appalachian Trail in the Great Smokey Mountains, kayaking and rafting at the US National Whitewater Center, the Wright Brothers National Memorial at Kill Devil Hills, as well as sailing and scuba trips at Florida Sea Base in the Keys.

A high adventure trip such as Philmont is transformative and the growth afforded our crewmembers from this life experience makes all those rugged miles of training and the trek under heavy pack worth its weight in gold. A part of me is still making that early morning climb on the trail up to Tooth Ridge at Philmont Scout Ranch. Once you’ve experienced this type of adventure you are forever connected to it; I believe all of us who journeyed along this timeless route left a part of ourselves behind – and that part will always be on the trail.

To view a full size PDF of this article, please click the image at the top or this link.