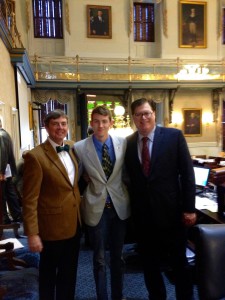 Student, Adam Miller (seen here with Greg Duckworth and Speaker of the House, Jay Lucas) visited the Capitol during his spring break from Thomas Edison State University where he is a Political Science major.

Increased funding to patch and repair South Carolina’s roads and bridges was priority #1 this past week during the budget debate in the SC House of Representatives. A sizeable portion of Tuesday’s debate focused on various approaches to road funding as we voted on next year’s state budget – which takes effect on July 1. The House budget calls for $415 million ADDITIONAL dollars to be spent on improving our state’s roads. This is in addition to state gas tax revenues which goes directly to SCDOT.

The likelihood that SC will recognize Georgia’s concealed weapons permits (CWP) took a major step forward. A Senate panel unanimously approved the bill after an hour of testimony and sent it to their full Judiciary Committee.

The SC Senate approved a state registry of refugees, just one day after terrorists bombed a Brussels airport and subway station, killing more than 30 people and injuring another 250. The Senate voted 39-6 to start the registry, which could be the first of its kind in the nation. The proposal still needs approval from the House. Registry backers said they are concerned terrorists could enter the state under the guise of being refugees. Several dozen refugees entered South Carolina last year, and an estimated 200 will arrive in our state this year – New York is the only other state considering a refugee registry.

A Senate committee advanced a bill that would require the release of police dashboard camera video in officer-involved shootings and sent the bill to the Senate floor for debate. Under current law, the release of the video can be kept secret if the investigating agency, usually the State Law Enforcement Division (SLED), says its release may harm their investigation. This bill would require a judge to make the final decision on whether video could be made public. The judge must cite clear and convincing evidence if footage should not be released.

Gov. Nikki Haley told the federal government this past week to either stop Japanese shipments of plutonium from going to the Savannah River Site or reroute the plutonium so that it doesn’t enter South Carolina. She says she doesn’t want SC to become a “permanent nuclear dumping ground.” Reportedly, ships carrying 331 kilograms of weapons-grade plutonium from Japan will soon dock at the Charleston Naval Weapons Station before the plutonium is sent to the Savannah River Site in Aiken County.