To read the story published on CarolinaLive.com, please click here! 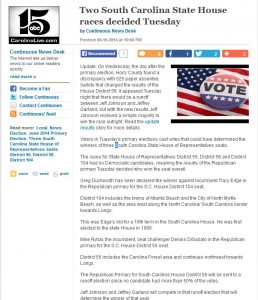 Update: On Wednesday, the day after the primary election, Horry County found a discrepancy with 525 paper absentee ballots that changed the results of the House District 58. It appeared Tuesday night that there would be a runoff between Jeff Johnson and Jeffrey Garland, but with the new results Jeff Johnson received a simple majority to win the race outright. Read the update results story for more details.

Voters in Tuesday’s primary elections cast votes that could have determined the winners of three South Carolina State House of Representatives seats.

The races for State House of Representatives District 56, District 58 and District 104 had no Democratic candidates, meaning the results of the Republican primary Tuesday decided who won the seat overall.

Greg Duckworth has been declared the winner against incumbent Tracy Edge in the Republican primary for the S.C. House District 104 seat.

District 104 includes the towns of Atlantic Beach and the City of North Myrtle Beach, as well as the area west along the North Carolina/ South Carolina border towards Longs.

This was Edge’s bid for a 10th term in the South Carolina House. He was first elected to the state House in 1996.

The Republican Primary for South Carolina House District 58 will be sent to a runoff election since no candidate had more than 50% of the votes.

Jeff Johnson and Jeffrey Garland will compete in that runoff election that will determine the winner of that seat.

District 58 includes the area southwest of the City of Conway and continues west towards Aynor and includes the town of Aynor.

We will post more information on these runoffs and recounts as soon as it becomes available.