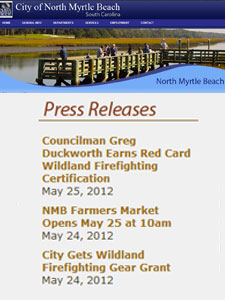 According to Duckworth, his interest in going through the red card certification process evolved from his service as Chairman of the Highway 31 Wildfire Task Force, which included local, state and national officials who studied all aspects of the wildfire incident and also made many recommendations on how to make North Myrtle Beach a Firewise Community. Immediately following the wildfire, he was appointed to chair the task force by Mayor Marilyn Hatley.

“My service as chairman of the task force allowed me to understand wildfire response and all of its ramifications from the outside looking in,” Duckworth said. “That led me to want to undergo the same training and certification testing as our Public Safety Department’s wildland firefighters, to gain an awareness of what it is like from the inside looking out. It is a very different point of view. As a policy maker, I emerged from the red card training and certification process with an even stronger appreciation for the work that our firefighters must do in these kinds of situations.”

Duckworth said that the road to his red card certification required gaining a technical understanding of the role different kinds of soils, vegetation, weather, topography and other factors play in wildfire behavior, and the way agencies respond to it. He also underwent the same rigorous physical testing that all red card candidates take.

Duckworth said that the Highway 31 Wildfire was a very serious wakeup call for the North Myrtle Beach area, and for any municipality that borders on undeveloped, forested areas. He said that as the North Strand’s development continues to move out into the wooded areas west of the Intracoastal Waterway, developers and homeowners have to be “firewise” in the types of building and landscaping materials that they employ. Duckworth pointed to Barefoot Resort & Golf, which is located in the city and was severely impacted by the Highway 31 Wildfire, as a prime example of a community that has learned how to implement landscaping and other changes that lead to becoming a Firewise Community.

“We also learned from the Highway 31 Wildfire that we must employ a teamwork strategy among the various agencies,” Duckworth said. “We must be proactive and ready to provide an effective, comprehensive response. Wildfires are like no other fire and, if one ever threatens our city again, we will certainly need and appreciate help from the S.C. Forestry Commission, Horry County Fire & Rescue and others. However, it is comforting to know that our very own firefighters are now trained and certified in wildland firefighting techniques and are prepared to act.”

To download a PDF of this press release, please click the image at the top or this link.