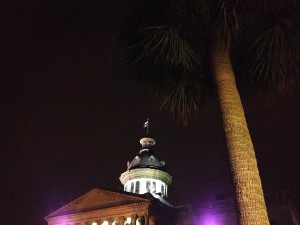 The House approved and sent the Senate a bill (H.3166) that disqualifies someone from receiving unemployment compensation if they fail screenings for illegal drugs required by a prospective employer as a condition of employment or if the applicant refuses to take a pre-employment drug test.

SC has filed suit against the federal government claiming the US Energy Department failed to uphold a 2003 agreement that launched the MOX project. The facility was originally supposed to be operating by September 2016. SC officials are pointing to the original agreement which pledged the Energy Department would remove at least 1 ton of plutonium currently stored at the site by January 2016 if MOX was not operational. The agreement calls for SC to receive payments of $1 million-per-day if the plutonium remained on-site after January. The plutonium must be disposed as part of a nonproliferation agreement with Russia.

SC farmers who lost most of their crops in last fall’s flooding could be eligible for up to $40-million in total grants to help them recover under a bill approved unanimously by the House Ways and Means Committee. The bill would allow farmers in disaster-declared counties to apply for grants from a newly-created Farm Aid Board. The bill heads to the House floor for a vote.

SC’s Secretary of Transportation warned senators that unless the state starts putting more money into repairing roads soon, it will end up costing much more to rebuild them. Secretary Christy Hall cited the example of a simple resurfacing project recently on Interstate 85 in Spartanburg. It was discovered the highway was so deteriorated that it had to be rebuilt. She says that can increase the cost of a project up to ten times. Meanwhile, the senate continues to wrangle over various road funding plans. They have been stalled for nearly a year. The House passed its road funding plan last spring.

Thousands of South Carolinians gathered on the State House grounds as Franklin Graham led a prayer rally as part of his “Decision America Tour,” an effort to reach all 50 state capitals for such events. I was proud to stand with him along with many other state legislators. It is God, not politicians, who will save America.

Education Bills to House Floor: Transformation of public education in SC took a major step forward when the House Education Committee voted unanimously to pass a series of bills to address the “Abbeville court ruling” focusing on shortcomings in our educational system.

Constitutional Amendment: The House approved, and sent the Senate (H.3041), a joint resolution for a proposed amendment to the SC Constitution that would have the State Superintendent of Education appointed by the Governor rather than elected by the state’s voters.

Cutting Red Tape & Costs: The House approved and sent the Senate a bill allowing SC universities and colleges to enter into a master interstate reciprocity agreement for offering online education programs so they don’t have to register with each state where a student resides. This will save hundreds of thousands of dollars a year. I co-sponsored the legislation. (H.4639)

Vets HS Diplomas: The House approved a bill calling for the issuance of high school diplomas to veterans who served in the eras encompassing the Korean War and the Vietnam War. (H.3420)
GI Bill Help: The House passed a bill revising the eligibility criteria for in-state higher education tuition rates for veterans and their dependents to ensure that South Carolinians can continue to take full advantage of federal G.I. Bill provisions and pay in-state tuition rates. (H.4515)

Pawnbroker Limits Lifted: The House approved a bill revising regulations on pawnbrokers. Among the revisions is an increase in the maximum amount of a loan that a pawnbroker is allowed to make from $2,000 to $15,000. (H.4090)

Zika Virus: SCDHEC reports there are no confirmed cases of the Zika virus in SC. SCDHEC has convened a Zika Task Force to plan and prepare to work with other state agencies, communities and health care providers.

Here are highlights on other items since my last update:

CASTLE DOCTRINE REINFORCEMENT:
The House approved and sent the Senate a bill revising the state’s provisions for immunity from criminal prosecution and civil actions for the justifiable use of deadly force against intruders. The legislation establishes a procedure for an evidentiary hearing on a pretrial motion to dismiss any charges against the defendant based on the justifiable use of deadly force and makes provisions for a court judgment, order, or decree denying legal immunity to be immediately appealable.

HOT CAR DEATH PREVENTION:
The House concurred with Senate amendments to a bill shielding from legal liability those who take actions to prevent hot car deaths of children and vulnerable adults who are left unattended in locked motor vehicles, and enrolled the legislation for ratification. The legislation provides that a person is immune from civil liability for property damage resulting from his/her forcible entry into a motor vehicle for the purpose of removing a minor or vulnerable adult from the vehicle if the person has a reasonable good faith belief that forcible entry into the vehicle is necessary because the minor or vulnerable adult is in imminent danger of suffering harm.

FISHING BILLS APPROVED:
The House approved and sent the Senate a bill revising fishing limitations imposed in the Southern Cobia Management Zone which encompasses all waters of this state south of Jeremy Inlet, Edisto Island. The legislation provides that, subject to the size limit established by federal regulation, possession of cobia caught in the Southern Cobia Management Zone is limited to one person per day, and no more than three per boat per day, from June 1 to April 30. It is unlawful to take and possess cobia in the Southern Cobia Management Zone from May 1 to May 31. This is to allow Cobia which come to this area to spawn a time period to repopulate state waters. Also, the House approved, and sent the Senate another bill revising provisions dealing with importing, possessing or selling imported fish, to clarify language in current law that the South Carolina Department of Natural Resources will continue to issue permits for the importation, breeding, and possession of grass carp or grass carp hybrids. These fish are commonly used to control the growth of the aquatic plant life that they eat.

The following are several notable new bills introduced this past week…

SHARK AND SKATE FISHING PROTECTION:
I introduced a bill this week pertaining to the fishing of sharks and skates. The bill establishes that no person shall intentionally, knowingly, recklessly, or with criminal negligence fail to salvage for bait or human consumption all skeletal muscular tissue of a cartilaginous fish, originating from the posterior side of the last gill slit to the pre‑caudal region, which would be reasonably expected to be harvested from a filet. “Cartilaginous fish” means all members of the subclass Elasmobranchii, including, sharks, skates, stingrays, and their products, eggs, or by‑products not intended for human consumption. The bill provides for penalties. The bill also outlines that it is unlawful to take or possess a great hammerhead shark, a smooth hammerhead shark, a scalloped hammerhead shark, or a Carolina hammerhead shark. Any of the aforementioned species must be released immediately if caught and must remain completely in the water at all times while being released. No person shall be permitted to take any photographs with the animal outside of the water.

PALMETTO FELLOWS SCHOLARSHIP DEFERMENT:
A bill was introduced to allow students eligible for the Palmetto Fellows Scholarship award to defer enrollment to specified times, should they choose to not attend a college or university immediately after high school graduation.

SUPPORTING AND STRENGTHENING FAMILIES ACT:
This bill allows a parent or person with legal custody of a child to delegate parental or legal custodian powers of the child to another adult via a temporary power of attorney. It can be effective for up to one year. It also requires the Department of Social Services to provide certain information about community support services to a parent when a child is left within the home during any DSS investigation.

SALES TAX EXEMPTION FOR FIREARMS:
A bill introduced this week revises provisions for sales tax exemptions, so as to exempt the sale of firearms. Because this exemption will be year-round, the legislation eliminates the current exemption for the sale of handguns, rifles, and shotguns that is provided for a limited period each year during the “Second Amendment Weekend” that follows Thanksgiving Day.