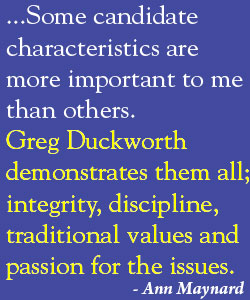 I, of course, recognized the name Greg Duckworth early in the campaign for S.C. House Seat 104. Having been a longtime resident of North Carolina, it took a while for me to feel involved and concerned with government issues of South Carolina upon relocating here.

I did learn, quickly, all that I could about North Myrtle Beach and its City Council and also realized all of the positives that were connected with Councilman Greg Duckworth. Never having met him during his three terms on the council, I was, however impressed with his accomplishments.

Less than a month ago, my husband and I met him and I can honestly say he is a breath of fresh air who sees the whole picture and what needs to be done, and he wraps himself around the focus with a perceptible passion.

As an offshoot of a military upbringing, some candidate characteristics are more important to me than others. Greg Duckworth demonstrates them all; integrity, discipline, traditional values and passion for the issues.