02 May Duckworth a Leader Worth Supporting, by Cleo Steele 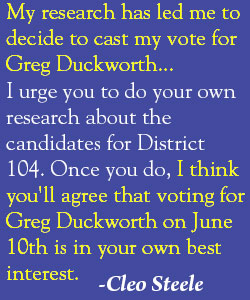 With the primary election for S.C. House of Representatives District 104 coming up on June 10th, I’ve already started to research the individuals who have announced their candidacy. My research has led me to decide to cast my vote for Greg Duckworth.

First, Duckworth has shown that he is willing to fulfill the responsibilities of his office, as shown by his exemplary attendance record as a three term member of the North Myrtle Beach City Council. He rarely missed the meetings, workshops, and special events. He took his responsibility seriously.

Second, Duckworth has volunteered his time to the community. He helped with the redesign of the animal shelters and parks in Horry County without charging for his professional work.

Third, Duckworth has shown his commitment to the environment. Among other things, he worked to bring a variety of agencies together to bring a wind-power electricity generating project into reality in North Myrtle Beach.

I urge you to do your own research about the candidates for District 104. Once you do, I think you’ll agree that voting for Greg Duckworth on June 10th is in your own best interest.

THE WRITER IS PRESIDENT OF THE NORTH MYRTLE BEACH REPUBLICAN CLUB.

To view the original letter to the editor on the Sun News Site where it was originally published May 2, 2014, click here!