15 May Duckworth First Candidate to Visit Me, by Martha Little 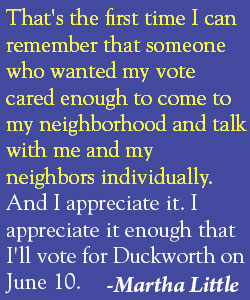 I live in the S.C. House of Representative District 104, but I don’t live in the city limits of North Myrtle Beach. I live in Horry County.

Greg Duckworth, candidate for House District 104, is the first candidate I can remember who cares enough about those of us outside the city limits to visit and ask for my vote. Duckworth came to my door and told me about the things he wanted to accomplish as my representative.

Then, he surprised me by asking me what I thought. He surprised me even more by actually listening to me. He cared about my concerns. He took notes about the things I thought were important. He listened to my ideas.

That’s the first time I can remember that someone who wanted my vote cared enough to come to my neighborhood and talk with me and my neighbors individually. And I appreciate it. I appreciate it enough that I’ll vote for Duckworth on June 10. So will my neighbors who were visited. I hope you will, too. We need a representative who cares about those of us not in the city limits!

This letter was originally published in the May 15, 2014 edition of the North Myrtle Beach Times.