Greg Duckworth | Duckworth Has Shown He is Worth Emulating, by Dick Steele
780
post-template-default,single,single-post,postid-780,single-format-standard,vcwb,tribe-no-js,ajax_fade,page_not_loaded,,qode-child-theme-ver-1.0.0,qode-theme-ver-7.5,wpb-js-composer js-comp-ver-4.3.2,vc_responsive

14 May Duckworth Has Shown He is Worth Emulating, by Dick Steele 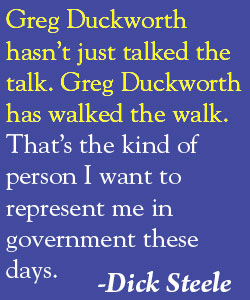 Greg Duckworth, candidate for S.C. House of Representatives District 104 has shown that he has the characteristics that are worth being followed by others.

Duckworth fulfilled the rigorous requirements to become an Eagle Scout when he was younger. Now, both of his sons have followed in his footsteps and earned Eagle Scout status on their own.

I’ve learned that sons don’t emulate their father unless the father has shown the ability to lead the sons along the right path. Greg Duckworth has obviously done that. The results speak for themselves.

You and I both know that children can’t be “made” to believe the same things as their parents. They have to be taught right and wrong. They need to be led to a pathway and then make their own way based on what they have been taught. If children end up on the right path as they make their way in life, it means that the parent had “the right stuff” and was a good leader.

To view the original letter to the editor on the Sun News Site where it was originally published May 14, 2014, click here!