Greg Duckworth | Duckworth is My Choice for Seat, by Cleo Steele
720
post-template-default,single,single-post,postid-720,single-format-standard,vcwb,vcwb-ver-2.6.1,tribe-no-js,ajax_fade,page_not_loaded,,qode-child-theme-ver-1.0.0,qode-theme-ver-7.5,wpb-js-composer js-comp-ver-4.3.2,vc_responsive

24 Apr Duckworth is My Choice for Seat, by Cleo Steele 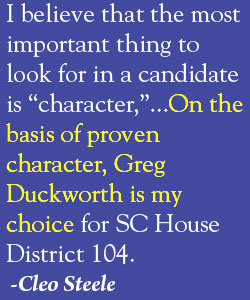 Greg Duckworth, candidate for SC House of Representatives District 104, has shown his dedication to the community many times. He and his landscape architectural firm have completed projects in Horry County and in the City of North Myrtle Beach without charging the government for their work.

Duckworth has worked to better many of the parks, buildings and animal shelters because he wanted to make a contribution to his community. Not everyone in public service is like that.

I believe that the most important thing to look for in a candidate is “character.” When I look at Duckworth’s character I see proven examples of the kinds of things that will benefit the citizens of District 104.

On the basis of proven character, Greg Duckworth is my choice for the SC House of Representatives District 104. I am going to vote for Duckworth in the primary on June 10th. I hope you will, too. We need someone of his character to represent us.

This letter was originally published in the April 24, 2014 edition of the North Myrtle Beach Times.