22 May Greg Searched for Qualified People, by Trudy M. Martin of Longs 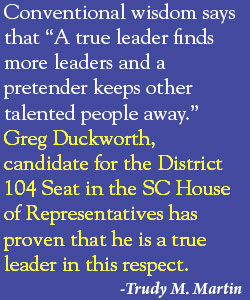 Conventional wisdom says that “A true leader finds more leaders and a pretender keeps other talented people away.” I guess that’s because a pretender is afraid he or she will be found out.

Greg Duckworth, candidate for the District 104 Seat in the SC House of Representatives has proven that he is a true leader in this respect. He has shown his leadership ability many times during his work with Boy Scouts of America and while a member of the North Myrtle Beach City Council. Moreover, he has always identified new co-workers and potential replacements for his position when he was ready to move on to new challenges.

When Duckworth had to cut back on his time with the Boy Scouts, he identified and recruited highly qualified replacements to take his place. Duckworth made sure that the quality he brought to the organization would continue to build once he left.

Greg Duckworth is a “true leader” who isn’t afraid of qualified people. He seeks them out, mentors them, and helps them become leaders.

This letter was originally published in the May 22, 2014 edition of the North Myrtle Beach Times.