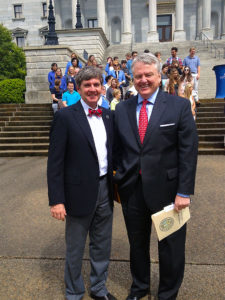 On the Capitol steps with SC State Treasurer, Curtis Loftis.

House passes final amendment to Roads Bill and now it moves to the Senate for an up or down vote:

The House had delayed action on the Senate amendments for several weeks until it received the findings of the Legislative Audit Council report which exposed insufficiencies within SCDOT. That year-long investigation provided keen, independent insights into the operations of SCDOT that are invaluable in re-tooling that agency to meet the current road crisis and create an agency citizens can have confidence in for years to come. With those new revelations in front of us, the House could not in good faith pass the Senate amendment because it fell short of true reform.
With much debate this past week, the House amended the Senate version of the roads bill (H.3579) by an overwhelming vote of 113-6. The legislative process exists so that the General Assembly can work together to move South Carolina forward – not provide opportunities for political grandstanding.

The House’s amendment preserves qualifications and requirements for Highway Commissioners, solidifies the transparency of the State Infrastructure Bank, and removes irresponsible budgeting practices that threaten the stability of our economy.

Provisions in the House Amendment to H. 3579:

Time for the Senate to Vote:

It’s now up to the Senate; they have the option of taking a vote or not taking a vote. A vote for concurrence would result in the bill’s passage and sending it to the Governor’s desk for signature. Nonoccurrence would result in the formation of a conference committee to hammer out differences. We obviously prefer a vote for concurrence, but welcome the idea of blending our two versions together. Regardless, the most important action is for the Senate to take a vote and bring us one step closer to fixing our roads. At the end of the day, South Carolinians want progress on this issue and repairing our crumbling infrastructure starts with SCDOT reform.

In closing, each year, lawmakers spend roughly 4 months hearing testimony and crafting legislation. The end of that 4-month period concludes with the beginning of the crossover period which occurs the first week in May. The crossover period simply demands that no more legislation can be considered by the House or Senate, forcing each body to act on legislation passed by the other body instead of new items in the remaining days of the session. In short, if a bill is going to be passed this year, it has to make it out of at least one chamber prior to this deadline.

If there is a particular piece of legislation you’re concerned about that hasn’t been passed leading up to crossover date, I hope you’ll contact me about it.

It is an honor to serve you and your family in the General Assembly. If you ever find yourself in need of assistance navigating state government, or if you have ideas on issues you want me to share with my colleagues in the House, don’t hesitate to contact me.