Greg Duckworth | It Is Time to Get off a Dead Horse, by Dee Myers of North Myrtle Beach
811
post-template-default,single,single-post,postid-811,single-format-standard,vcwb,vcwb-ver-2.6.1,tribe-no-js,ajax_fade,page_not_loaded,,qode-child-theme-ver-1.0.0,qode-theme-ver-7.5,wpb-js-composer js-comp-ver-4.3.2,vc_responsive

29 May It Is Time to Get off a Dead Horse, by Dee Myers of North Myrtle Beach 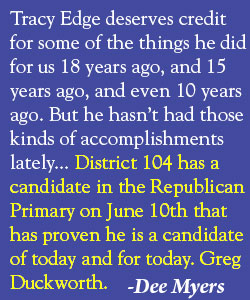 Jay Specter urged the voters, in a recent letter, to not change horses mid-stream. He was suggesting that we continue to vote for Tracy Edge in District 104 of the SC House of Representatives.

I have a different saying that applies even more. When the horse is dead, get off!

That’s why it’s time for a change. District 104 has a candidate in the Republican Primary on June 10th that has proven he is a candidate of today and for today. Greg Duckworth.

The time to change horses, mid-stream or not, is when the horse is dead. If we’re going to use old sayings, let’s use, “When the Horse Is Dead—Get Off!” It’s time to vote for Greg Duckworth on June 10th.