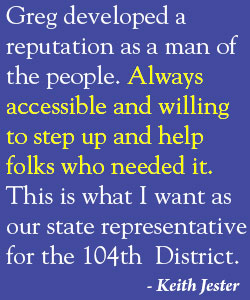 I am fairly active in local political circles and have met both candidates for the 104th District. My experience with Tracy Edge is that during the election cycle he is everywhere. However, in between election cycles I can’t find him, a no show.

Tracy has held this same office for 18 years. In my opinion, that is too long for anyone to hold the same office. I want to encourage folks that it’s time for a fresh face.

That fresh face is Greg Duckworth. Greg is a three-time North Myrtle Beach city councilman. While on the council Greg developed a reputation as a man of the people. Always accessible and willing to step up and help folks who needed it. This is what I want as our state representative for the 104th District.

This letter was originally published in the June 6, 2014 edition of The Sun News.