To read the article published by August Dittbenner on MyHorryNews.com, please click here! 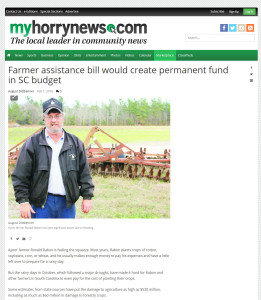 Aynor farmer Ronald Rabon is feeling the squeeze. Most years, Rabon plants crops of cotton, soybeans, corn, or wheat, and he usually makes enough money to pay his expenses and have a little left over to prepare for a rainy day.

But the rainy days in October, which followed a major drought, have made it hard for Rabon and other farmers in South Carolina to even pay for the cost of planting their crops.

Some estimates from state sources have put the damage to agriculture as high as $530 million, including as much as $60 million in damage to forestry crops.

That money doesn’t include his living expenses, payments on equipment, or any profits. Usually, he says, he pays back the loan each year, but this year the poor weather prevented that.

And while Rabon’s financial advisers have told him they can extend the term of his loan, he says that his profit margins are so narrow that he doesn’t know how he can pay the loans back without assistance.

“If we don’t get some help, we’re out,” he said. “I’ll probably farm next year. I can get the money to farm another year, but it’s like cutting your hand and you need stitches, and you just put a Band Aid on it.

“We aren’t making enough profit with a good year to pay a back bill,” he continued. “Crop prices have been cheap for the last three years.”

According to Rabon, by January of any given year he is usually working on equipment and planning his year out, but this year his shop sits empty and he isn’t sure what he will do come planting season.

Last year’s poor weather simply exacerbated the problems he and other farmers have dealt with for much of their lives, and Rabon says that the future of farming in the United States is questionable if something isn’t done to help.

And as part of the meeting, the representatives and councilmen announced a bill that would provide assistance for farmers who suffer financial loss due to natural disasters.

The bill, which was introduced in the House Ways and Means committee last Thursday, would create a permanent fund, separate from the state’s general fund, to provide aid for farmers and create a board to determine an application process for assistance.

The bill has been sponsored by a bipartisan group of over 60 state representatives including local representatives Kevin Hardee, Alan Clemmons, Greg Duckworth, and Mike Ryhal.

“The chairman of Ways and Means is supportive of the bill and is a sponsor of the bill, so hopefully it will move quickly to the house floor, then we can get it over to the senate and get it passed,” said Hardee.

According to Hardee, between federal aid and the proposed bill, assistance for farmers is on its way, and not a moment too soon– though it could still be months before assistance payments begin.

“They need money now to pay their bills,” he said.

In the meantime, representatives from Clemson’s Cooperative Extension program say they are available to help farmers in non-monetary ways.

“It’s not that we’re capable of capitalizing any relief or offering funding, but we do offer information that helps these growers deal with the problems they’re going to encounter,” said Clemson Extension representative Blake Lanford.

Extension offices have experts on site for many issues that face farmers, such as unproductive soil, insect infestation or disease, and if the office doesn’t know a specific method to help they can find the correct information.

“A lot of times we work in partnership with other agencies that do specific things,” Lanford said. “If Clemson Extension isn’t the right resource, we can certainly get them in touch with that resource.”

Meanwhile, farmers like Rabon are waiting for the help they desperately need so they can keep farming.

Rabon is concerned for the future of farming in the United States, pointing out that many people don’t understand the role of farmers in the production of goods. He also worries that when he stops farming, his land won’t be used for farming anymore.

“You know what they’re going to do with my farm?” he said. “Build houses. You can’t eat a house.”