To read the article by Tom O’Dare on MyHorryNews.com, please click here! 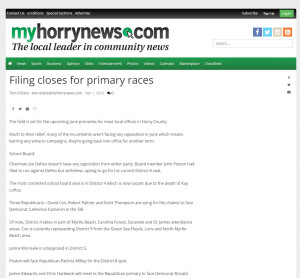 The field is set for the upcoming June primaries for most local offices in Horry County.

Much to their relief, many of the incumbents aren’t facing any opposition in June which means barring any write-in campaigns, they’re going back into office for another term.

Chairman Joe DeFeo doesn’t have any opposition from either party. Board member John Poston had filed to run against DeFeo but withdrew, opting to go for his current District 8 seat.

The most contested school board seat is in District 4 which is now vacant due to the death of Kay Loftus.

Three Republicans—David Cox, Robert Palmer and Scott Thompson are vying for the chance to face Democrat Catherine Cameron in the fall.

Janice Morreale is unopposed in District 5.

Poston will face Republican Patricia Milley for the District 8 spot.

James Edwards and Chris Hardwick will meet in the Republican primary to face Democrat Ronald Bessant in November to replace Cox in District 9.

Renee Elvis and David Jordan are running as Republicans for the Clerk of Court office. No Democrats filed for the race.

Republicans Jonathan Hyman and Angie Jones are hoping to replace retiring Roddy Dickenson as the county treasurer. No Democrats entered the race.

Incumbent Gary Loftus and Dick Withington filed to run for the Republican primary for the District 4 seat. Withington was arrested Tuesday for allegedly trying to bribe other candidates in return for his dropping out of the race.

The winner will face Democrat Robin Gause in November.

Republican Cam Crawford has no opposition for his District 6 seat.

Republican incumbent Paul Prince has primary opposition from Terry Fowler for the District 9 council seat. No Democrats filed for the office.

Republicans Devon Blackwell and Danny Hardee are vying for the District 10 seat with no Democratic opposition.

Most members of the Horry County legislative delegation ended up with no opposition for either June or November.

With state Senator Ray Cleary deciding not to seek re-election, four Republicans filed to run for his Senate District 34 seat.

They are Reese Boyd, Joe Ford, Stephen Goldfinch and Dick Withington who had also filed for the Horry County District 4 seat.

No Democrats filed for the seat.

The filing period for anyone running for office in the June party primaries or the November general election ended at noon on March 30.

The party primaries are slated for June 14.