To read the article published by Michael Smith on MyHorryNews.com, please click here! 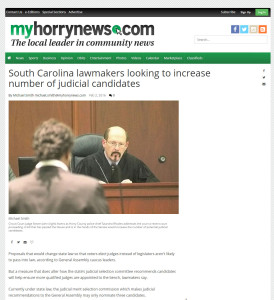 Proposals that would change state law so that voters elect judges instead of legislators aren’t likely to pass into law, according to General Assembly caucus leaders.

But a measure that does alter how the state’s judicial selection committee recommends candidates will help ensure more qualified judges are appointed to the bench, lawmakers say.

Currently under state law, the judicial merit selection commission which makes judicial recommendations to the General Assembly may only nominate three candidates.

House Bill 3979 would remove that cap and allow the commission to nominate all qualified candidates.

Bannister said the proposal would increase the pool of qualified candidates from which judges are picked.

“We think [this] would open up the process to all of the qualified candidates,” Bannister said. “I don’t think the six legislators on that committee should pick the three that are qualified to go on to be a judge.”

South Carolina is one of two states in the country that elects its judges in the General Assembly instead of by gubernatorial appointment or partisan elections.

First, the judicial merit selection commission that’s made up of state lawmakers and prominent attorneys screens judicial candidates. Then the commission makes recommendations to the General Assembly, which conducts a final vote.

Twenty-six, including several bill co-sponsors, didn’t vote. There were five lawmakers who didn’t vote due to excused absences.

H. 3979 received first reading in the Senate on April 29, 2015 and was referred to the Senate Judiciary Committee, where it remains.

The measure separate from a resolution filed by Rep. Christopher Corley, R-Graniteville, which would require all state judges, from the circuit courts to the Supreme Court, to be elected in partisan elections.

H. 4406 and H. 4402 have been referred to the House Judiciary Committee. Both bills, however, face bipartisan opposition.

Bannister, the House majority leader, said it would be a “terrible idea” to elect judges in partisan elections.

“In the states that have it that way, the judges don’t like it. The politicians don’t like it,” Bannister said. “The only one’s who like it are the lawyers who fund the campaign.”