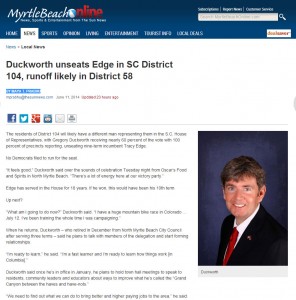 The residents of District 104 will likely have a different man representing them in the S.C. House of Representatives, with Gregory Duckworth receiving nearly 60 percent of the vote with 100 percent of precincts reporting, unseating nine-term incumbent Tracy Edge.

No Democrats filed to run for the seat.

“It feels good,” Duckworth said over the sounds of celebration Tuesday night from Oscar’s Food and Spirits in North Myrtle Beach. “There’s a lot of energy here at our victory party.”

Edge has served in the House for 18 years. If he won, this would have been his 10th term.

“What am I going to do now?” Duckworth said. “I have a huge mountain bike race in Colorado … July 12. I’ve been training the whole time I was campaigning.”

When he returns, Duckworth – who retired in December from North Myrtle Beach City Council after serving three terms – said he plans to talk with members of the delegation and start forming relationships.

Duckworth said once he’s in office in January, he plans to hold town hall meetings to speak to residents, community leaders and educators about ways to improve what he’s called the “Grand Canyon between the haves and have-nots.”

“We need to find out what we can do to bring better and higher paying jobs to the area,” he said. “We need to raise intellectual capital, and we’ll see growth in a positive way.”

Edge said he was disappointed he didn’t win, but “the sun will come up tomorrow.”

“We’ll start preparing and go forward with the runoff if there is one,” Jeff Johnson said. “I’ll get together with my supporters and go from there.”

To win a seat outright, a candidate must receive 50 percent of votes cast, plus one vote, according to state law.

Mike Ryhal will likely retain his seat in District 56, receiving about 55.5 percent of the vote to Dennis DiSabato’s 44.5 percent, with 97 percent of precincts reporting Tuesday night.

“This is truly a community that paid attention,” Ryhal said. “They did their homework and got out to the polls and voted.”

No Democrats filed to run in either district.