To read the editorial published on MyrtleBeachOnline.com, please click here! 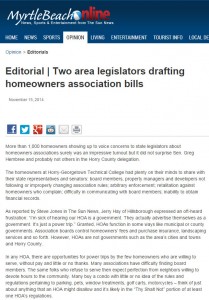 More than 1,000 homeowners showing up to voice concerns to state legislators about homeowners associations surely was an impressive turnout but it did not surprise Sen. Greg Hembree and probably not others in the Horry County delegation.

The homeowners at Horry-Georgetown Technical College had plenty on their minds to share with their state representatives and senators: board members, property managers and developers not following or improperly changing association rules; arbitrary enforcement; retalitation against homeowners who complain; difficulty in communicating with board members; inability to obtain financial records.

As reported by Steve Jones in The Sun News, Jerry Hay of Hillsborough expressed an oft-heard frustration: “I’m sick of hearing our HOA is a government. They actually advertise themselves as a government. It’s just a power trip.” Granted, HOAs function in some ways like municipal or county governments. Association boards control homeowners’ fees and purchase insurance, landscaping services and so forth. However, HOAs are not governments such as the area’s cities and towns and Horry County.

In any HOA, there are opportunities for power trips by the few homeowners who are willing to serve, without pay and little or no thanks. Many associations have difficulty finding board members. The same folks who refuse to serve then expect perfection from neighbors willing to devote hours to the community. Many buy a condo with little or no idea of the rules and regulations pertaining to parking, pets, window treatments, golf carts, motorcycles – think of just about anything that an HOA might disallow and it’s likely in the “Thy Shalt Not” portion of at least one HOA’s regulations.

“I’ve been working on the issue a very long time,” Hembree says, recalling frequent complaints he heard in his many years as solicitor. “A week did not go by” that the solicitor’s office did not hear about a perceived HOA abuse. Nearly all fell well short of a criminal act, and out of the solicitor’s purview. “Over the last couple of months,” Hembree estimates he has received 50 to 75 phone calls and perhaps 50 emails regarding HOAs.

Not all the recent comments are negative. Many have told the Little River senator their HOAs are working well.

Hembree is working on three pieces of proposed legislation. One would require that all covenants be available prior to a contract for purchase. State representative-elect Greg Duckworth is taking the lead on this. Prospective buyers should know about the HOA they are going to be living with well before the transaction closes, Hembree points out.

A second proposal would offer online training for HOA officers so they know something of their fiduciary responsibilities. The training would not be required, in the initial draft of the legislation.

The third piece would expand the jurisdiction of Magistrate’s Court to handle disputes among owners and their associations. “They’re really neighbor disputes,” Hembree says, and don’t need to be in Circuit Court where the cost is higher. Magistrate’s Court does not require hiring an attorney. Hembree has initial drafts of the second and third proposals. “The intention is to pre-file the bills in December.” Hembree anticipates other legislators may make proposals.

Duckworth, too, notes that many folks, those pleased with their HOAs, “are concerned with going too far” in addressing concerns. He describes the delegation’s approach as “soft shoe” so that problems can be addressed without punishing the many associations that are working well. That seems to be a reasonable approach.

With all the HOAs in the area, disagreements are inevitable. People have differences of opinion and homeowners certainly don’t want fees increased. Homeowners have a responsibility to know something about the officers they elect to the HOA board, and a responsibility to take part in the association’s annual meeting and election.