To read the story by Steve Jones published on MyrtleBeachOnline.com, please click here! 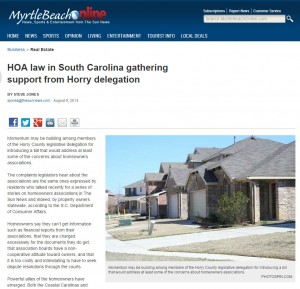 Momentum may be building among members of the Horry County legislative delegation for introducing a bill that would address at least some of the concerns about homeowners associations.

The complaints legislators hear about the associations are the same ones expressed by residents who talked recently for a series of stories on homeowners associations in The Sun News and indeed, by property owners statewide, according to the S.C. Department of Consumer Affairs.

Homeowners say they can’t get information such as financial reports from their associations, that they are charged excessively for the documents they do get, that association boards have a non-cooperative attitude toward owners, and that it is too costly and intimidating to have to seek dispute resolutions through the courts.

Powerful allies of the homeowners have emerged. Both the Coastal Carolinas and S.C. Realtors associations have targeted two points on which they would like to see legislative action.

Both, as part of their legislative agendas, want the legislature to address what Realtors feel are excessive fees for copies of association documents to show prospective buyers, and to create a simple way that complaints can be heard by disinterested parties.

“I’m finding that individuals who have an issue or a concern with an HOA are not being heard,” said Nate Johnson, legislative director for the Coastal Carolinas Association of Realtors.

He said he doesn’t know an easy way to fix a contractual relationship, such as that between homeowners and homeowners associations. But he believes the legislature can fix things such as the Realtors’ problem with charges for homeowner documents.

“Anybody who is purchasing a home has a right to see those,” said Rep. Mike Ryhal, R-Carolina Forest.

Ryhal said he wouldn’t want to overregulate homeowners’ associations, but acknowledged buyers should know what they are getting into.

Hardwick also said he hears homeowners complain that their concerns are not heard by those in charge.

“They won’t listen to us,” he characterized the complaint. “They do what they please.”

Sen. Greg Hembree, R-North Myrtle Beach, hears the same thing, and he believes he knows one way to address it. He said that homeowner vs. HOA disputes could be directed to magistrate courts for resolution.

The current system, he said, forces those who want to press complaints to hire an attorney for a court battle. The homeowner filing such an action, he noted, would not only have to foot the bill for his or her own attorney, but would be funding part of the association’s legal fees through HOA dues.

He agreed that HOAs likely would have an attorney in a magistrate court hearing, but he said that magistrates are accustomed to legal disputes presented by lay people, and might be less likely to be influenced by the side with paid legal help.

Yes, he said, the magistrate’s ruling could be appealed, but added, “It’s still better than what we’ve got.”

Hembree and Greg Duckworth, who is running unopposed for the House seat held by Rep. Tracy Edge, both feel there should be some type of training for those who sit on HOA boards.

Training is also a legislative goal of the S.C. Chapter of the Institute of Community Associations, which advocates for certification of property management companies.

Duckworth said he heard people complain about HOAs as he was campaigning for the primary, and he’s ready to act, assuming he’s elected in November.

Hardwick said that HOAs originally only took care of a couple of basics – mowing common areas and paying for community streetlights. But now they oversee what can be a complicated set of rules and handle sizable budgets.

“I think it’s crazy that you can’t have a boat and trailer in your yard,” he said of the regulations that some associations adopt.

Hardwick said he believes HOAs that are managed with common sense do well. Those that aren’t can get into trouble with their members.

Sen. Luke Rankin, R-Myrtle Beach, said he too believes the great majority of HOAs are well-run and just a few give a black eye to the rest.

He said the Realtors involvement in the effort is a plus, and could help to draw some support around a bill.

Support for HOA legislations, he said, “can ebb and flow. I would say right now it’s in more of an ebbing stage.”

But things such as support from Realtors and the Horry delegation could reverse that to a flow stage, he said.

Rankin said he thinks certification of management companies as a plus.

As for mandatory board member training, Hembree believes it too could improve HOA management. It should be as simple and take as little time as possible. It could be done through the Internet, which would add to its ease.

“If (board members) aren’t willing to do that,” he said of some training, “they should not be on the board.”