To read the editorial published on MyrtleBeachOnline.com and written by Elizabeth Townsend, please click here! 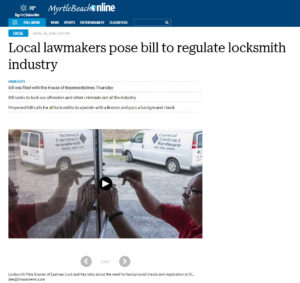 Following the arrest of a local locksmith and registered sex offender, local lawmakers introduced a bill into the state House of Representatives on Thursday, seeking to regulate the lock and key industry.

The proposed bill bars convicted sex offenders from the industry, requires all locksmiths to obtain a license to practice through the Department of Labor, Licensing, and Regulation, and makes successfully passing a criminal background check mandatory, among other guidelines.

“I think it would mean greater peace of mind for the public,” Rep. Greg Duckworth of North Myrtle Beach, the primary writer of the bill, said. “It’s not about setting a super high bar [locksmiths] have to achieve. It’s just more or less a background check that we’re advocating for, and I think most people in that industry feel good about that too because it only helps strengthen the public’s confidence in them.”

Local locksmiths and lawmakers alike expressed outrage about the lack of regulations in the industry in the Palmetto State after convicted sex offender Panteleimon “Peter” Spirakis, former owner of Phil’s Lock and Key in North Myrtle Beach, was arrested in March in connection with sex crimes against two 4-year-old children.

Spirakis, a twice-convicted sex offender who remains jailed, voluntarily surrendered his business license April 4 just before North Myrtle Beach city officials held a hearing to determine whether to revoke it under the violation of a “moral turpitude” ordinance after suspending the license March 18.

“We all care about safety,” Duckworth said. “This bill would help everybody.”

The bill, which could be amended as it moves through the legislative process, would also prohibit anyone who has previously had a locksmith license revoked for fraud or misrepresentation in any of the 15 states that require locksmith licensing from operating.

If the bill goes through, qualifying businesses would be issued a license number that would have to be noted in all advertising, and locksmiths would be required to carry a permanent employee registration card.

If the bill is made into law, those seeking a license would be required to apply for a license and pay a licensing fee, the amount of which is to be determined.

“There would likely be a minimal annual fee,” Duckworth said.

The LLR would probably work with local locksmith associations to determine the appropriate amount of the fee then pose it to lawmakers, Duckworth said.

On Thursday, the bill was read at the House of Representatives and passed to the House Labor, Commerce and Industry Committee for review.

A sub-committee of the LCI will schedule a hearing on the bill, and lawmakers, locksmiths and all those with a vested interest can come and argue for or against the bill, and/or to amend its wording and guidelines.

The bill that’s been posed is essentially a draft, and Duckworth said he would like to reach out to local locksmiths for their opinion on ways the bill could possibly be amended to better suit their industry.

Duckworth wasn’t sure when the sub-committee would meet on the bill, but said he would be pushing for it to be sooner rather than later; however, he said it’s possible the bill could languish in limbo if the sub-committee is booked solid with other matters to hear.

If a hearing can’t be had by June, the bill would expire this legislative term and would have to wait until next January to be re-filed, Duckworth said.

However, if the bill moves forward it would then go to a full LCI meeting. It would then potentially journey back to the House, where it could lay dormant for months if representatives don’t agree on it.

“The legislative process can be arduous because you’ve got so many cooks in the kitchen,” Duckworth said.

If the bill is approved by the House, it will go to the Senate next.

State Sen. Greg Hembree formerly served as Horry County solicitor and his office prosecuted Spirakis while he was there.

Hembree plans to champion for the bill if it moves to the Senate and told The Sun News previously that he expects the bill to get a lot of support, particularly within the Horry County delegation.

Bills seeking to create locksmith regulations had been proposed in 2006, and again in 2011, according to legislative records, but didn’t make it through.

Duckworth said he would hate to speculate on the likelihood of it passing, but felt hopeful about it.

“This is something people have ask for. … I like to respond to people’s needs,” he said.