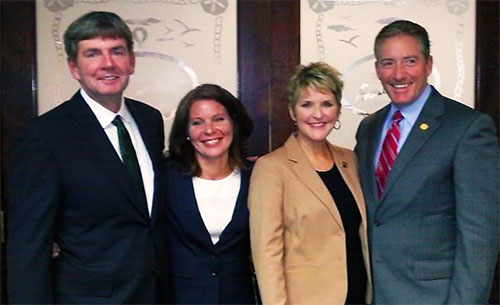 At the North Myrtle Beach Republican Club meeting on Thursday, Jan. 9, Sen. Greg Hembree enthusiastically announced Greg Duckworth’s run for SC House Seat 104. Hembree was speaking on how important it is for people to be actively present for service in order to make our communities better places to live saying, “You’re either at the table or you’re on the menu.”

The Honorable Hembree went on to emphasize Duckworth’s history of being “at the table”, touching on his important part of the successful growth of North Myrtle Beach while on City Council and mentioning that he is a problem solver and never someone to speak highly of himself – instead preferring the collaboration mentality of “we did it” – in other words, Greg Duckworth is a team player. The three-term Councilman Greg Duckworth is always ready, willing and able, at the table, and not one to sit back and be merely present. Without further adieu, Senator Hembree said, “It’s a privilege and a pleasure to introduce my friend, Greg Duckworth.”

Duckworth looked refreshed and ready for this challenge, opening by saying, “The best of intentions, the best of plans, sometimes can result in complacency. I’m tired of the SC House Seat 104 putting us on the menu. Put me in, coach! I’m ready to play!” he said. He went on to present a hypothetical situation, asking those gathered how long they think they would collect a paycheck for a job they showed up and did work for only 60 percent of the time. All were in agreement it would be wise to consider someone new for that job, someone who would make the seat relevant again. He let everyone know he’s ready to be actively present in the State House and then asked those in attendance to consider him for the job. The reply was a rousing round of applause before Duckworth ended with, “I would be honored to continue my public service at the next level for you.”

Mayor Marilyn Hatley was excited as she immediately stood up to endorse Duckworth saying, “He won’t brag about himself, but I can certainly stand up here and brag about Greg Duckworth. This is a man who works very hard for his constituents. I know no other person who has given of his talents in the way Duckworth has given. He has saved our city thousands, probably hundreds of thousands of dollars over the past 12 years by giving of his time and his talent while on the North Myrtle Beach City Council.” Mayor Hatley touched on the current person in SC House Seat 104 having an “I” mentality. She stressed the importance of having someone who would be willing to be a team player and said, “We need somebody up there who is going to say ‘we’ – that person being Greg Duckworth.

She closed by saying, “I promise you Greg Duckworth will work, and he will have that respect that we need. With a good strong, community campaign we can win this election. Greg Duckworth is a visionary. He will work hard…Greg and Greg…what a wonderful team!”

To view the original article by Michele Chastain on the North Myrtle Beach Times Site where it was originally published January 16, 2014, click here!