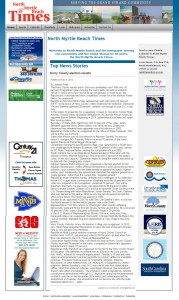 The Horry County results are in. Did your candidate(s) win? With only 36 percent of registered voters braving the sunny polls, several incumbents remain in office and a few new faces ran unopposed. In most races, the Republicans overshadowed their competitors, except for a few districts where Dems ran unopposed.
Republican Governor Nikki Haley retained her seat with nearly 69 percent (68.97, to be exact) of Horry County voters endorsing her reelection. Democrat Vincent Sheehan garnered 28 percent, certainly not enough to oust S.C.’s top lady.

Secretary of State Mark Hammond, with 70 percent of the votes, easily defeated opponent Ginny Deerin (Dem), who received only 29 percent. Hammond has defeated three opponents since his election in 2002.

Republican Curtis Loftis ran unopposed for the office of State Treasurer. This will be Loftis’ second term.

When Alan Wilson won his first election to Attorney General, he was our nation’s youngest AG. Tuesday Wilson received 70 percent of the votes against Democrat Parnell Diggs’ 29 percent.
Comptroller General Rickard Eckstrom (Rep.) was reelected for a fourth term over challenger Kyle Herbert. Eckstrom, with 70 percent of the votes, served as SC State Treasurer before winning the comptroller office in 2002.

South Carolina has a new Republican Superintendent of Education with the election of Molly Mitchell Spearman. She received 67 percent of the state’s votes. In her new capacity, Spearman hopes “to bring the state’s education up to date with the changing jobs market.”

Adjutant General Bob Livingston ran unopposed in the last election for the Adjutant General post. Voters affirmed Amendment 2 which gives the governor authority, upon consent from the state senate, to appoint the state’s highest military post. Additionally, the amendment classified the adjutant general as a “major general,” rather than the current title, “brigadier general.”
Republican Hugh Weathers handily defeated two challengers in his reelection bid for S.C.’s agriculture commissioner. Weathers received 85 percent of the votes as compared to his competitors’ combined 14 percent. This will be Weathers’ third term; he previously was appointed to fill the post in 2004.

Senior Senator Lindsey Graham will continue to represent South Carolina in the U.S. Senate along with fellow Republican, Junior Senator Tim Scott. Graham, who was elected to the seat in 2002, is only the second person to hold the office since Strom Thurmond was elected in 1956.

Senator Scott, appointed in 2013 to fulfill Sen. Jim DeMint’s term, is now the first black senator to be elected by popular vote in the South.

Councilman Harold Worley (Rep.) will retain his seat on Horry County Council. Worley received 79 percent of the votes, compared to Democratic opponent Roberta Kuntz’s nearly 27 percent.
Republican Holly Heniford ran unopposed for her bid to the Horry County Board of Education. She defeated incumbent Harvey Eisner in the June primary.

And, finally, a boost for nonprofit organizations. Tuesday’s 87 percent voter approval of Amendment 1 permits nonprofits to conduct raffles for charitable purposes. Proceeds must be used for “charitable, religious, fraternal, educational, or other eleemosynary (of, relating to, or supported by charity) purposes. Before Tuesday’s vote, S.C. was one of only four states where raffles, other than state-run lotteries, were illegal. However, the amendment doesn’t take effect immediately. The change is called a legislatively-referred constitutional amendment. Although S.C. legislators approved the amendment so that it could be on the November 2014 ballot, and voters approved the amendment on Tuesday, the amendment will not become law until the state legislature approves it… again.

To view the original article by Jenean Todd on the North Myrtle Beach Times Site where it was originally published November 6, 2014, click here!