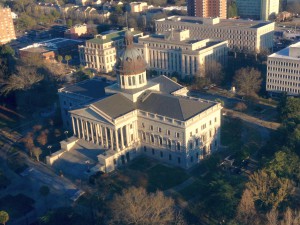 Friends, items happening this week for the SC House of Representatives reported below.

The House of Representatives concurred in Senate amendments to H.4639, relating to INTERSTATE RECIPROCITY AGREEMENTS FOR POSTSECONDARY DISTANCE EDUCATION, and enrolled the bill for ratification. The legislation provides that the Commission on Higher Education may enter into interstate reciprocity agreements, such as the State Authorization Reciprocity Agreement, governing the operation of postsecondary distance education programs offered by accredited degree granting institutions of higher learning in South Carolina. Since colleges and universities that offer online education programs must obtain authorization in every state where a pupil resides, the legislation is offered as a means of making this authorization process less complex and expensive by allowing the institutions of higher learning in South Carolina to make use of a single distance education protocol that applies in all the states that have entered into a reciprocity agreement.

The House concurred in Senate amendments to H.3534, a bill EXPANDING ELIGIBILITY FOR PARTICIPATION IN THE SOUTH CAROLINA HIGHER EDUCATION EXCELLENCE ENHANCEMENT PROGRAM that is funded with Education Lottery proceeds for the purpose of enhancing the educational opportunities of low income and educationally disadvantaged students, and enrolled the bill for ratification. The legislation expands the criteria for institutions eligible to participate in the South Carolina Higher Education Excellence Enhancement Program so as to include: an institution that offers at least one nonsectarian program at the baccalaureate level; an institution that meets criteria for having a predominately female enrollment; and an institution that receives Title III funding and is accredited by an accrediting organization recognized by the United States Department of Education. Provisions are included for the Commission on Higher Education to conduct an annual review of funds allocated to schools to ensure that they are being used appropriately.

The House approved S.1049, relating to the REINSTATEMENT OF MARKETING COOPERATIVE ASSOCIATIONS, and enrolled the bill for ratification. The legislation establishes provisions that allow marketing cooperative associations to seek reinstatement from the Secretary of State within two years of expiration.

The House approved and sent the Senate H.5020, a bill declaring the third Saturday in May of each year as “SOUTH CAROLINA DAY OF SERVICE” when all South Carolinians are encouraged to roll up their sleeves and lend a hand to make a positive difference in our great state.

The House approved and sent the Senate H.3989, the “PERSONS WITH DISABILITIES RIGHT TO PARENT ACT” which establishes protections for the parenting rights of persons with disabilities. The legislation: establishes requirements and safeguards in child custody, child protection, and probate guardianship proceedings; prevents people with disabilities from being denied their right to parent, or have custody of, children; prohibits child placing agencies, adoption service providers, and assisted reproductive technology service providers from denying disabled people access to services; requires assessments, and evaluations, of certain people with disabilities in probate and family court proceedings; requires consideration of ways to accommodate disabilities to better enable disabled persons to parent a child adequately; requires consideration of a parent’s or legal guardian’s disability to avoid the removal of the child as well as preserve or reunify a family; allows access to adaptive parenting equipment, instruction on adaptive parenting techniques, and reasonable accommodations with regard to accessing services that are available to nondisabled parents or legal guardians; and requires that reasonable efforts must be individualized based on the specific needs of the parent’s or legal guardian’s disability.

The House amended, approved, and sent the Senate H.4510, a bill establishing LIMITATIONS ON THE NUMBER OF FOSTER CHILDREN WHO MAY BE PLACED IN A FOSTER HOME. The legislation allows a foster home to provide full-time care for up to eight children, with up to five of them being foster children. The exceptions to this maximum number include keeping a sibling group together, allowing children to remain in their home community, returning a child to a home that was a previous placement for them, complying with a court order, and any placement in the best interest of the child.

The House approved and sent the Senate H.3036, a bill declaring January 17 of each year as “EARTHA KITT DAY” in South Carolina in honor of the late Eartha Mae Kitt, nationally and internationally known actress, singer, and native South Carolinian and to promote cultural tourism in the state in order to enhance the economic well being and improve the quality of life of all South Carolinians.

The House approved and sent the Senate H.4944, a bill REQUIRING THAT GENERAL ELECTIONS BE HELD FOR UNCONTESTED MUNICIPAL RACES by eliminating an exception that currently allows a general election not to be conducted to fill a municipal office when only one person has filed for the office and no one has filed a declaration to be a write in candidate.

The House approved and sent the Senate H.4535, a bill REPEALING OBSOLETE LAWS. The legislation repeals various outdated South Carolina Code provisions relating to: assisting in duels and challenges for such combat; seduction under promise of marriage; adultery and fornication; adventuring in lotteries; unlawful operation of public dance halls on Sundays; supplanted provisions for unlawful work on Sundays and the prohibited sale of certain items on Sundays; a prohibition on railroads removing their lines from towns with more than five hundred inhabitants; the unlawful removal of hand or lever cars from tracks and leaving them near crossings; and, a prohibition on minors playing pinball. The legislation includes provisions that the repeal or amendment of any law by this act does not affect any pending actions, rights, duties, or liabilities.

The House approved and sent the Senate H.4124, a bill UPDATING STATE MENTAL HEALTH FACILITIES TERMINOLOGY, including a substitution of the term ‘law enforcement officer’ for the term ‘marshal’ and ‘Department of Mental Health’ for obsolete references to the ‘Mental Health Commission’ in order to reflect current Department operations.

The House approved and sent the Senate H.4542, the “EXPERIMENTAL HEALTH CARE TREATMENT LAW” which provides authorization for physicians to prescribe certain promising experimental treatments to an eligible patient who has considered all available approved treatments for an advanced illness that has been medically determined to be irreversible and, without life sustaining measures, likely to result in death within six months. The provisions apply only to an investigational drug, biological product, or device that has successfully completed phase one of an FDA approved clinical trial but remains under further investigation in federal clinical trials and has not yet been approved for general use by the U.S. Food and Drug Administration.

The House refused to grant free conference powers on H.3114, the ”SOUTH CAROLINA PAIN-CAPABLE UNBORN CHILD PROTECTION ACT” which establishes a prohibition on the performance of abortions beginning at twenty weeks following fertilization.

The House approved and sent to the Senate H.5064, a joint resolution directing the Department of Health and Environmental Control to conduct or commission a feasibility study concerning the most efficient and cost effective manner of PROVIDING CLEAN DRINKING WATER TO THE RESIDENTS OF WADMALAW ISLAND IN CHARLESTON COUNTY without the use of wells with the potential for contamination.

The House adopted S.1009, a concurrent resolution to respectfully and humbly issue a “CALL TO PRAYER” FOR THE STATE OF SOUTH CAROLINA and invite her citizens everywhere to pray that God will continue to bless this country, our noble state and the freedoms for which they stand.

The House adopted S.1079, a concurrent resolution to honor our senior nutrition programs, the seniors they serve, and the volunteers who care for them and to declare March 2016 as “MARCH FOR MEALS MONTH” in South Carolina.

The House adopted and sent the Senate H.5083, a concurrent resolution TO REMEMBER ALL THE CHILDREN AND THEIR FAMILIES WHO WERE KILLED IN THE HOLOCAUST, TO HONOR HOLOCAUST SURVIVORS AND THEIR RESCUERS AND LIBERATORS, and to mark the unveiling of the Permanent Butterfly Memorial Monument in Myrtle Beach that will commemorate them for both present and future generations.

The House adopted and sent the Senate H.5085, a concurrent resolution to recognize that abuse and neglect of children is a significant problem, to commend the important work being done to combat this serious problem, and to declare Tuesday, April 26, 2016, as “CHILDREN’S ADVOCACY CENTER DAY” in South Carolina.