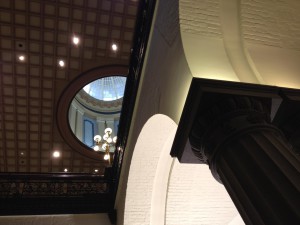 This week in Columbia we hit the ground running strengthening our gun laws, streamlining government, and continuing our work in legislative subcommittees. Due to a recent South Carolina Supreme Court decision, we had to go back and apply a fix to an existing statute pertaining to the Stand Your Ground law. The fix sets forth the judicial procedure to assert the Castle Doctrine defense. It also strengthens the existing Castle Doctrine which includes provisions that prohibit criminals from using a Stand Your Ground defense while committing a crime. The measure is strongly backed by the pro-second amendment National Rifle Association and it passed the House unanimously.

We also gave more clarification to a 2014 measure passed by a statewide constitutional amendment that allows the governor and lieutenant governor to run on the same ticket. The bill allows the governor to assign duties to the lieutenant governor, very similar to the functional relationship between the president and vice president. This “good government” measure increases accountability in the executive branch and creates important safeguards.

This week a House Judiciary Subcommittee passed a bill that would cause the State Superintendent of Education to be appointed by the Governor instead of elected by popular vote. This would increase the amount of accountability surrounding the office of the Superintendent of Education by allowing the Governor to directly oversee the delivery of public education to South Carolina’s children. Reforms like this one deliver a better return on the taxpayer investment and real results for parents and students.
The debate on a roads repair bill remains hung up in the Senate. In order to understand the SCDOT and SC Transportation Infrastructure Bank, the Senate has requested briefings on these agencies be given to the Senate by the agencies’ leaders. Though this roads bill has been the Senate’s #1 priority for this session, after almost a month back in Columbia the Senate’s official debate will not begin until February 16 at the earliest. This bill has also pushed debates on other important issues even further back on the Senate’s calendar.
To make the case that our 6-month-long legislative session should be shortened, the SC House of Representatives will take off the week of February 15 saving taxpayers about $77,000. The House is also planning to take unpaid leave on the weeks of March 28 and April 4.

Here are highlights on other items since my last update:

ANTI-SHARIA LAW BILL
The House amended and gave second reading approval to a bill that prohibits the application of any secular or religious foreign laws that violate rights guaranteed by the State or US Constitution. The legislation specifies that this prohibition does not apply to purely ecclesiastical matters and should not be not be interpreted by any court to conflict with any federal treaty or other international agreement to which the United States is a party to the extent that such treaty or international agreement preempts or is superior to state law on the matter at issue.

VETERANS’ ISSUES STUDY COMMITTEE
The House approved and sent the Senate a bill to provide an extension for a state and local level Veterans’ Issues Study Committee until March 1, 2026. This bill also requires the committee to issue biennial reports on their studies to the General Assembly and the Governor, in order to help the state government better address the needs and concerns of our veterans.

MAGISTRATE COURT CIVIL JURISDICTION INCREASED
A bill was passed to increase the civil jurisdiction for magistrate court from $7,500 to $25,000. These cases include confessions of judgment, personal injury claims, surety bonds, property rights, and recovery of earnest money or personal property.

Finally, the legislative oversight committee continued its inquiry into the DJJ (Department of Juvenile Justice). The inquiry surrounds new requests for additional resources from the DJJ to address growing concerns at facilities in our state. It is important the DJJ recognize signs of peril in young offenders and provide them proper rehabilitative structures, thus helping the offender regain control of their life while saving taxpayers from footing the bill for repeat offenders. The committee is engaged in a thorough examination of the DJJ and its operations and will make their findings public when complete. It is an honor and a privilege to serve you in Columbia this year. If you need help navigating state government, or have any thoughts or concerns about what we are doing, please do not hesitate to contact me, thank you!