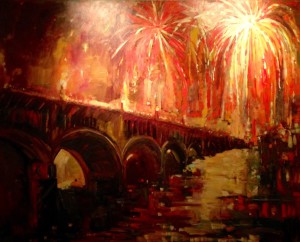 The Gervais Street Bridge is listed on the National Register of Historic Places. It is an arch bridge constructed from reinforced concrete and the third bridge to be built on this site across the Congaree River. The first, built around 1827, was burned down in the American Civil War and the second, built in 1870, was replaced by the current bridge. At the time of its construction it was the widest roadway in the state. It was the only bridge across the Congaree River until 1953.

In our 10th week of the Legislative Session in the South Carolina House, we made headway on committee work, pouring over the Senate’s amendments to our roads plan, and taking the first steps to amend our bankruptcy laws, making them friendlier to gun owners. My colleagues and I also worked diligently this week to clear the House calendar as we enter into the annual budget debate this coming week.

Unlike Washington, we take time to balance our budget each year. I take a conservative approach to allocating state funds, and I value your input, so here is a link to the budget proposal for fiscal years 2016/2017 as proposed by the House Ways and Means Committee.

The House Judiciary Committee’s General and Family Law Subcommittee approved a measure amending our state’s bankruptcy laws to ensure they are friendly to gun owners. You may ask, “What does bankruptcy have to do with the right to keep and bear arms?” Good question!!! During bankruptcy proceedings those who have fallen on hard times are many times required to sell off certain assets to satisfy their debts – in some cases including firearms. The provision approved this week would allow gun owners to keep up to three firearms and up to 1,000 rounds of ammunition per firearm in any bankruptcy proceeding. This ensures those who must undergo the unfortunate scenario of filing for bankruptcy do not also lose their ability to exercise one of the most important constitutional amendments.

Finally, if you were able to read my update from last week and as you may have seen in various news reports, the Senate finally sent back their amendments to our roads and infrastructure funding bill. My House colleagues and I have continued to look closely at the Senate changes. The issue of fixing our roads while creating a long-term solution to our immediate problem remains complex.

We have worked in the House to address the failed governance model of the SC Department of Transportation (SCDOT) tasked with paving and maintaining our roads. While the Senate roads plan does call for additional road and infrastructure funding, that money can actually only be spent as part of the budget process. We will be proactive in making sure these extra funds are part of next week’s budget debate. Also, the Senate version may not reform the SCDOT enough, likely requiring us to consider amending their changes for more significant reform to the SCDOT making the agency more accountable and efficient. After the annual budget debate which begins tomorrow, March 21st, we will take up the Senate’s amendments to the road funding bill, and I welcome your input.

As always, thank you for the privilege of serving you in Columbia. If I can ever be of assistance to you, or if you have ideas on issues you want me to share with the rest of the General Assembly, please don’t hesitate to let me know. Thank you!