To read the story published on SFGate.com, please click here! 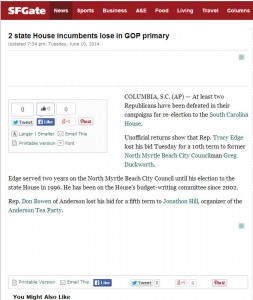 COLUMBIA, S.C. (AP) — At least two Republicans have been defeated in their campaigns for re-election to the South Carolina House.

Edge served two years on the North Myrtle Beach City Council until his election to the state House in 1996. He has been on the House’s budget-writing committee since 2002.