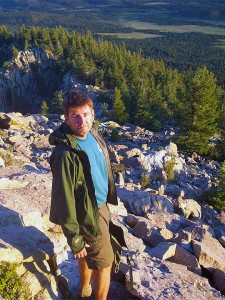 Greg Duckworth of North Myrtle Beach was recently honored by the Boy Scouts of America and received one of its most prestigious awards.

The William T. Hornaday Gold Badge, often referred to as “the Olympic medal bestowed by the earth” was presented to Duckworth during the Hornaday Award Weekend in Sumter. “It was quite an honor and a big surprise when it happened,” he said.

Duckworth, leader of Boy Scout Troop 888, hosted by Our Lady Star of the Sea Catholic Church, owns Environmental Concepts LLC, a landscape architecture and land planning company. He shares his knowledge by teaching Scouts in the Pee Dee Area Council and from across America, enabling them to do projects to earn their Landscape Architecture merit badges.

According to the Pee Dee Council of Boy Scouts of America, Duckworth received the award for his instruction and for his “continuing distinguished efforts in natural resource conservation, his work to bring renewable energy to the S.C. coast and his success in merging principles of conservation with government practices.”

Duckworth, who became an Eagle Scout in West Virginia in 1980, said Scouting taught him to be a better person and a better leader. In a way, he is giving back what his leaders gave to him.
What he does while he is on this earth – the legacy he leaves behind him, whether it is doing something to better the earth, humanity or quality of life, is important to him. “What will our legacy be? What are we going to leave on this earth?” said Duckworth, who is also running for S.C. House in District 104.

Duckworth and his wife, Christine, have two sons, Brandon and Trevor, who are following in his footsteps. “It’s important to do fun things together that hopefully will continue on in the future,” Duckworth said.

Requirements to become an Eagle Scout, the highest rank attainable, include an extensive project that the Scout plans, leads and manages. Brandon earned his Eagle Scout rank in 2008 after he and other Troop 888 Scouts created a nature trail and planted indigenous plants along it at Loris Park. Trevor earned his in 2010 when he and other Troop members held a free car wash for food or other items to benefit the Humane Society of North Myrtle Beach.

Duckworth has taken Scouts to the Philmont Scout Ranch in New Mexico for several years, and is planning a trip in July. Philmont, the world’s largest youth camp in size and participates, offers many unique challenges and adventures. Before the Scouts start on one of the trails, they are at 6,500 feet above sea level, and they climb to over 12,000 feet to camp. “It’s unlike anything else you’ll ever do in your life,” he said.

Duckworth said bright kids with good ideas are everywhere. “It gives me hope for our future. In the future, they’ll be the ones running the world, and hopefully doing a better job of it,” he said.

To view the original article by Peggy Mishoe on the Sun News Site where it was originally published May 17, 2012, click here!