31 Oct The Sun News | No Obvious Choice on North Strand 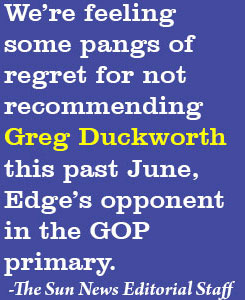 Two years ago, we easily recommended that voters return Republican Rep. Tracy Edge to Columbia rather than his Democratic challenger, Charles Randall. Edge’s seniority, intellect, legislative know-how and record of helping his North Strand district were all important in that decision. Now voters in House District 104 are faced with the same decision, and we’re simply not so sure this time around.

The past two years have not been kind to Edge, who has seen personal issues overwhelm what had been a strong record of public service. In both the 2011 and 2012 legislative sessions he racked up the most absences of any of our local delegation. This past year, he missed more votes than he took, an appallingly frustrating record for a leader who had been an effective and influential advocate for our area.

If we’re honest, we’re feeling some pangs of regret for not recommending Greg Duckworth this past June, Edge’s opponent in the GOP primary. At the time, we bowed to Edge’s long history of getting results for his district and expressed hope that his personal issues – which had become a distraction and kept him away from his public work too often – were coming to an end. In the months since, those issues have unfortunately continued. A race between Duckworth and Randall would have been an easier decision, given Duckworth’s political experience and savvy and Randall’s relative inexperience. That’s not the choice facing voters, however.

If Edge is elected – and we strongly suspect he will be, despite his personal issues – he has some work ahead to make up for what have been two years of largely absent effort. He can still point to a strong record of success in finding state funds for projects in his district and is always ready with a quick rundown of his achievements. Most of those achievements, however, are now years old. His opponent is right to point out that a legislator’s influence and abilities are only worthwhile to his district if he shows up for work, something Edge has failed to do far too many times in recent years. 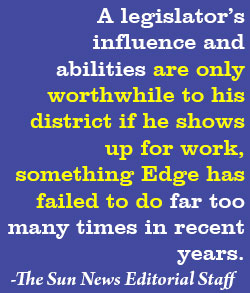 As we said two years ago, we have substantial respect for Randall, who is running for all the right reasons: a call to service, attention to community issues and a genuine desire to improve the lot of his district. But he suffers from a lack of experience in the political arena and an unfortunate simplistic view of how real change is accomplished. His jobs plan as he described it to us, for instance, consists of personal appeals by him to local businesses, asking them please to hire another person. Once again, we’d encourage candidates such as Randall, who have a real heart for public service but lack some of the know-how and experience, to start on the city, county or school board level, rather than jumping straight into state or federal races.

We’re hard-pressed to make a clear recommendation in this race. If we could be sure of sending the Tracy Edge of a few years ago back to Columbia, he would certainly outshine his opponent and we wouldn’t hesitate to support his candidacy once again. But we’ve seen little evidence thus far that such a change is in the works. At the same time, while we certainly respect Randall, his political inexperience concerns us, although we have no doubt of his willingness to work hard and with the best interests of his constituents in mind.

Our best recommendation to North Strand voters, as frustratingly vague as it is, is to follow your conscience. If you believe Edge when he says he’s ready to get back to work for you, he’s the better choice. If you think once again that he’ll largely be absent from his seat in Columbia for the next two years, Randall is ready to fill that seat every day, though without the same power, expertise or experience.

To view the original editorial by the Sun News editorial staff that was originally published October 31, 2012, click here!