Greg Duckworth | There is No Free Lunch for Us, by Linda Braswell
755
post-template-default,single,single-post,postid-755,single-format-standard,vcwb,vcwb-ver-2.6.1,tribe-no-js,ajax_fade,page_not_loaded,,qode-child-theme-ver-1.0.0,qode-theme-ver-7.5,wpb-js-composer js-comp-ver-4.3.2,vc_responsive

08 May There is No Free Lunch for Us, by Linda Braswell 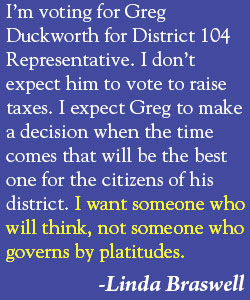 One of the first things my parents taught me is to expect to pay for the things I want. Dad always used to say “Remember, there is no such thing as a free lunch. If someone tries to tell you there is, be careful!”

Government provides us with services we need. They provide roads and road maintenance, police and fire protection and other things we can’t do without. And, we pay for those things through taxes. I don’t like paying taxes any more than you do, but I’ve learned that there is no such thing as a “free lunch,” so I do it.

The incumbent in SC House of Representatives District 104 is bragging that he never voted to raise taxes and he never will. While this sounds good, I wonder how he expects the state government to pay for the services they have to provide to us. I know that the costs to maintain my home have gone up over the past years. And the cost of food has gone up. And the cost of gasoline that I and the police and fire department use has gone up.

There doesn’t have to be waste and abuse for costs to go up. Even the most careful and frugal of us have seen our costs go up. I couldn’t keep my home without paying more than I did years ago. How can the state keep going without keeping up with inflation?

It is irresponsible to categorically say “I will never vote for a tax increase.” I want a representative who will use common sense to make sure the state services will still be available when needed—and do it as economically as possible.

I’m voting for Greg Duckworth for District 104 Representative. I don’t expect him to vote to raise taxes. I expect him to make a decision when the time comes that will be the best one for the citizens of his district. I want someone who will think, not someone who governs by platitudes.

Let’s elect Greg Duckworth and make sure we get the best person for the job instead of someone who promises us a “free lunch” that he can’t deliver!

This letter was originally published in the May 8, 2014 edition of the North Myrtle Beach Times.