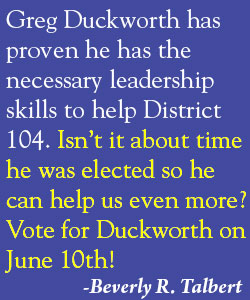 A leader always exhibits leadership at an early age. Greg Duckworth, candidate for SC House of Representatives District 104 did just that. He took control of his life and helped others at the same time.

One example is earning the Eagle Scout designation while still a teen. Duckworth completed a community service project to earn Eagle Scout status, and helped other scouts with their projects while completing his own.

Duckworth’s leadership skills continued to improve through the years and today are exemplary. His time on the North Myrtle Beach City Council showed his ability to lead. He worked with the other members of Council to get projects completed, leading by example instead of trying to force others to come to his point of view.

Duckworth also showed his leadership skills when he worked to get the county, state and Federal governments to work together to get a model wind-generating electricity program completed in District 104. That program is proving to be so successful that it is now being copied by other locales!

Yes, Greg Duckworth has proven he has the necessary leadership skills to help District 104. Isn’t it about time he was elected so he can help us even more? Vote for Duckworth on June 10th!

This letter was originally published in the May 22, 2014 edition of the North Myrtle Beach Times.