To read the story published on WBTW, please click here. 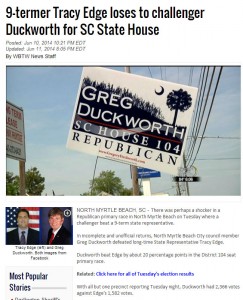 NORTH MYRTLE BEACH, SC – There was perhaps a shocker in a Republican primary race in North Myrtle Beach on Tuesday where a challenger beat a 9-term state representative.

Duckworth beat Edge by about 20 percentage points in the District 104 seat primary race.

With all but one precinct reporting Tuesday night, Duckworth had 2,366 votes against Edge’s 1,582 votes.

Duckworth said he spent Election Day with his wife visiting various poll locations in the district to thank the poll workers. It’s a tradition he’s had throughout his political career.

“That’s a long day for them sitting there and taking care of the polls and it’s not gone unnoticed,” said Duckworth.

Duckworth said since January his campaign team has gone door to door speaking to the residents of North Myrtle Beach, a factor he said helped him to secure the votes.

“Having the opportunity to reach out and talk to so many people and explain to them what our campaign platform was but then also hearing about their concerns,” said Duckworth.

Duckworth called his opponent a gentleman, saying Edge called him after results were announced.

“He said Greg I’m sure you’ve seen the polls or heard the results coming in and I just want to congratulate you and I thanked him and thanked him for his many years of service to the folks of district 104,” said Duckworth.

Duckworth said his next step is getting to know other state lawmakers, something he said will help him be affective at the job. He said his other goal is to continue dialogue with residents of the district.

Edge served two years on the North Myrtle Beach City Council until his election to the state House in 1996. He has been on the House’s budget-writing committee since 2002.

There could be a challenger against Duckworth in the general election, but that is unlikely in this district.

— The Associated Press contributed to this report