To read the article by Bob Juback on WBTW.com, please click here! 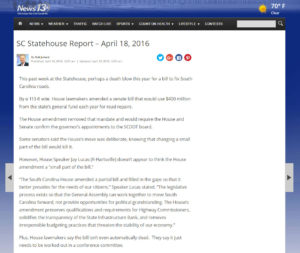 This past week at the Statehouse, perhaps a death blow this year for a bill to fix South Carolina roads.

By a 113-6 vote, House lawmakers amended a senate bill that would use $400 million from the state’s general fund each year for road repairs.

The House amendment removed that mandate and would require the House and Senate confirm the governor’s appointments to the SCDOT board.

Some senators said the House’s move was deliberate, knowing that changing a small part of the bill would kill it.

However, House Speaker Jay Lucas (R-Hartsville) doesn’t appear to think the House amendment a “small part of the bill.”

“The South Carolina House amended a partial bill and filled in the gaps so that it better provides for the needs of our citizens,” Speaker Lucas stated. “The legislative process exists so that the General Assembly can work together to move South Carolina forward, not provide opportunities for political grandstanding. The House’s amendment preserves qualifications and requirements for Highway Commissioners, solidifies the transparency of the State Infrastructure Bank, and removes irresponsible budgeting practices that threaten the stability of our economy.”

Plus, House lawmakers say the bill isn’t even automatically dead. They say it just needs to be worked out in a conference committee.

Even if the bill dies, extra money will still go to South Carolina roads this year.

The House put an extra $415 million for roads into its budget.

A bill that would, among other things, require transgender people to use public bathrooms of the gender at birth and not the gender of which they identify, probably got more talk last week than the roads situation.

The bill would apply to public schools and other public buildings.

It would allow private businesses to make their own rules.

A state senate subcommittee listened to two days of testimony last week on the bill.

However, there’s not a great chance the bill will ever become law.

It’s relatively late in the session. Plus, there’s strong opposition, including from Governor Haley, who would likely veto it if it ever made it to her desk.

In the wake of a North Myrtle Beach locksmith who has been arrested twice on child sex charges, four Horry County state Representatives introduced a bill Thursday (4/14) in the House to require locksmiths be licensed, to require signed work order forms when they open residences or vehicles and to prohibit locksmiths from having convictions for sexual offenses or certain other crimes.

This issue has been in the news since North Myrtle Beach locksmith Panteleimon Spirakis was arrested last month.

Spirakis was also in trouble several years ago on child sex charges.

Earlier this month, he gave up his business license.

The bill to put tighter controls on locksmiths is now in a House committee.

A state Senate committee approved a bill last week to require a permit for any events and demonstrations on the Statehouse grounds.

The bill also makes it against the law to incite violence or unlawful conduct on the grounds and it allows law enforcement to remove and disburse those people that they think cause a threat to public security, health or well-being.

This bill came about after violence broke out at the Statehouse last summer between two groups on different sides of the Confederate flag issue.

The full senate will now debate the bill. One of the two sponsors is Sen. Greg Hembree (R-North Myrtle Beach).

Last Wednesday (4/13), a Senate committee approved a bill that would, with some exceptions, require South Carolina to recognize concealable weapons permits issued by Georgia and North Carolina.

The full Senate will now debate the bill.

The House passed the bill last April so if the Senate passes it without amending it, it goes to the Governor.

The South Carolina House passed a bill to include licensed dentists and oral surgeons as “emergency medical providers.”

The bill now goes to the Senate.

The sponsor of the bill is Rep. Russell Fry (R-Surfside Beach).

Dr. Canty is now 70 years old. He’s a former member of the House and pastored Savannah Grove Baptist Church for more than 40 years.

The resolution is now in the Senate.