To read the article published by Bob Juback on WBTW.com, please click here! 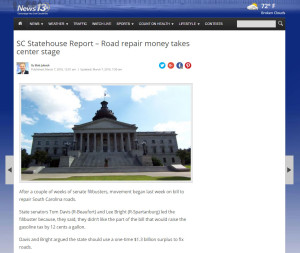 After a couple of weeks of senate filibusters, movement began last week on bill to repair South Carolina roads.

State senators Tom Davis (R-Beaufort) and Lee Bright (R-Spartanburg) led the filibuster because, they said, they didn’t like the part of the bill that would raise the gasoline tax by 12 cents a gallon.

Davis and Bright argued the state should use a one-time $1.3 billion surplus to fix roads.

“We’ve got $1.3 billion more this year being collected from South Carolinians than last year, and if you’re going to address the problem you start with the money you have in hand before you go back to the taxpayers and say we’re going to raise your taxes,” Davis said.

The new plan would not increase taxes but would set aside an additional $400 million towards repairs.

SCDOT secretary Christy Hall says that would bring the pavement on 95 percent of South Carolina interstates up to “good” condition but only 35 percent of our primary and secondary roads.

Many democrats oppose the new language, as do some republicans.

Republican House Speaker Jay Lucas (R-Hartsville) said the House is committed to a long-term solution to the roads issue, adding for “323 days, the Senate has had every opportunity to show leadership and propose a real, long-term solution for road repair in South Carolina. The current Senate amendment simply kicks the can further down the road and frankly, into a pothole. The General Assembly has been using general fund dollars to slap a band-aid on roads for years with very little to show for it. I urge the Senate to give this issue the attention that it requires and rally around a proposal with a long-term solution that keeps our families safe and our economy thriving.”

The senate will debate the bill tomorrow (3/8).

To read the bill as it stands now, click here.

South Carolina has a law called “Daniel’s Law,” which allows an adult, with some exceptions, to leave an unharmed infant at an open health care facility, law enforcement center, fire house or place of worship with no questions asked and with no risk of a criminal property.

The House last week (3/1) passed a bill that raises the maximum age of the infant from one month to six months old.

The bill also requires such “safe havens” to post a notice that shows you that it is a “safe haven.”

The bill is now in a Senate committee.

Among the bill’s sponsors are representatives Heather Crawford of Socastee and Pat Henegan of Bennettsville.

The South Carolina Senate introduced a bill that would change the state’s death penalty law.

The bill says if a person was less than 18 years old at the time they committed the crime for which they were convicted, they can not be sentenced to death or to a term of “life in prison without the possibility of parole.”

On the same day (3/1), Senator Malloy introduced another resolution, which says any offender under the age of 18 can not be confined with prisoners older than 18.

Both of these bills are now in a Senate subcommittee that includes senators Malloy and Greg Hembree (R-North Myrtle Beach).

The House passed a bill on Thursday (3/3) called the “Second Amendment Preservation Act” which, among other things, says the state will not enforce any laws that limit the right of a person to own, possess, or use a firearm.

The bill would also prohibit the state from accepting any federal money — or spending any state money — toward any federal requirement that requires guns to be registered or confiscated.

There is strong opposition to the bill, which is now in a senate committee.

The South Carolina House Judiciary Committee also approved a bill that would get rid of, what some consider, 11 outdated state laws.

Among them, those in which is still technically illegal to work or dance on Sundays in the state.

Another old law (from 1880) makes adultery, or couples living together outside of marriage, illegal and punishable by up to a year in jail.

One of the two sponsors of the bill is Rep. Stephen Goldfinch (R-Murrells Inlet).

The full House will now debate the bill.

And the state’s longest-serving state representative, Grady Brown (D-Bishopville), will retire after 32 years in the South Carolina House.

Brown represents all of Lee County and parts of Kershaw and Sumter counties.

The primaries for that seat, as well as those for all state house and senate seats, take place June 14.

The general election is November 8.