Greg Duckworth | We Need Someone to Represent Us, by Helinda Gray
752
post-template-default,single,single-post,postid-752,single-format-standard,vcwb,vcwb-ver-2.6.1,tribe-no-js,ajax_fade,page_not_loaded,,qode-child-theme-ver-1.0.0,qode-theme-ver-7.5,wpb-js-composer js-comp-ver-4.3.2,vc_responsive

08 May We Need Someone to Represent Us, by Helinda Gray 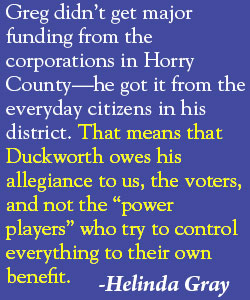 Ask yourself, as I did, who is an elected official owe allegiance to? The obvious answer is that it is to those who helped fund his or her run for office.

I understand that it takes money to get elected, and I have started to investigate how candidates get their funding. It is public record for anyone who wants to look it up. It seems that there has been a trend lately for Representatives to get their funding from corporate backers or their employers.

Greg Duckworth, candidate for SC House of Representatives District 104 received the majority of his funding from local citizens in checks of $100 or less. He didn’t get major funding from the corporations in Horry County—he got it from the everyday citizens in his district.

After doing research, I’m going to vote for Greg Duckworth on June 10th. I hope you will, too. We need someone in Columbia who will be working for you and me!

This letter was originally published in the May 8, 2014 edition of the North Myrtle Beach Times.