Greg Duckworth | What Has Edge Done for Us? by Marti Drummond of North Myrtle Beach
818
post-template-default,single,single-post,postid-818,single-format-standard,vcwb,vcwb-ver-2.6.1,tribe-no-js,ajax_fade,page_not_loaded,,qode-child-theme-ver-1.0.0,qode-theme-ver-7.5,wpb-js-composer js-comp-ver-4.3.2,vc_responsive

29 May What Has Edge Done for Us? by Marti Drummond of North Myrtle Beach 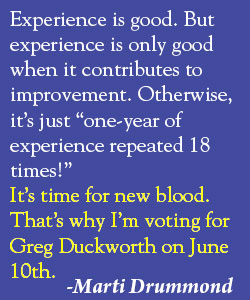 In a recent letter to the editor, Jay Specter wrote about Tracy Edge’s experience in Columbia. Experience is good IF it is used to benefit the citizens in your district. Otherwise, it’s just a number.

What has Edge done for his constituents while holding the seat in District 104 of the SC House of Representatives? He has not been effective in working with other representatives from the coastal region to build a coalition that brought state resources to our area. In fact, the things he has accomplished as a “lone eagle” seem to have ended years ago.

Edge continues to send out postcards about funds he claims he gets for District 104, but most of those “accomplishments” happened years ago. I wonder what he has done for us recently. I expect that when I get his next mail out, he’ll claim some achievements for this area, but he won’t include dates of when they happened.

Experience is good. But experience is only good when it contributes to improvement. Otherwise, it’s just “one-year of experience repeated 18 times!”

It’s time for new blood. That’s why I’m voting for Greg Duckworth on June 10th. Let’s get someone into office who has the energy and skills to get District 104 the resources it deserves. After all, we’re worth it!