Greg Duckworth | Why Is he Shifting the Blame? by Donald G. Kenny of North Myrtle Beach
826
post-template-default,single,single-post,postid-826,single-format-standard,vcwb,vcwb-ver-2.6.1,tribe-no-js,ajax_fade,page_not_loaded,,qode-child-theme-ver-1.0.0,qode-theme-ver-7.5,wpb-js-composer js-comp-ver-4.3.2,vc_responsive

29 May Why Is he Shifting the Blame? by Donald G. Kenny of North Myrtle Beach 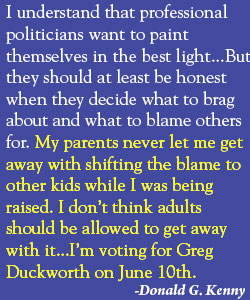 The incumbent District 104 SC House of Representative is bragging that he has never voted for a tax increase and never will. But, legislation that he voted for has forced municipalities and counties in South Carolina to add services while reducing the amount of state funding available to pay for those services.

This has forced counties and municipalities to raise taxes. That was the only option available to them. Then, he bragged that he didn’t raise taxes and accused those on county and city councils of raising taxes, when the legislation he voted for gave them no choice!

I understand that professional politicians want to paint themselves in the best light. In fact, it’s necessary that they do that if they want to continue to be elected. But they should at least be honest when they decide what to brag about and what to blame others for.

My parents never let me get away with shifting the blame to other kids while I was being raised. I don’t think adults should be allowed to get away with it.

I’m voting for Greg Duckworth on June 10th. He has the courage to make the tough decisions and the honesty to take responsibility for what he does. Vote for Greg Duckworth in the Republican primary. Let’s make sure we have a Representative who will tell it like it is instead of blaming others.