Share
The Bureau of Ocean Energy Management (BOEM) hosted its sole offshore oil hearing in South Carolina this past Tuesday and on the same day the steps of the SC Capitol were full of supporters from all over our state in opposition to Washington DC’s position on offshore oil drilling along our coast. The morning media event was kicked off with a speech by Congressman Mark Sanford and followed with bipartisan pairs of Senators and Representatives advocating in support of our fragile coastline.
Included during my speech were the following remarks: “From the sparkling ocean, to the pastoral midlands, to the mountains of the upstate, every part of South Carolina has special ecosystems that rely upon us for protection. Along with my colleagues, we were hired to do a job and, in this case, our job is to represent the people and to protect our environment. And in as much as our beaches are a major economic driver for our economy, we must protect our coast from offshore oil.”
I was honored that Mayor Marilyn Hatley was in attendance as she spoke at a second media event for Mayors in the afternoon.   On Tuesday, a House Ways and Means subcommittee heard requests by members of the House Opioid Abuse Prevention Study Committee for additional funding beyond what some agencies tasked with curbing the opioid epidemic already receive. The full House Ways and Means Committee will begin budget deliberations next week and I will continue to keep you updated on this important process. Reducing the number of opioid-related deaths continues to be a priority for my colleagues and me.   The House also gave initial approval to legislation granting permanent status to Exceptional SC, a program that allows students with exceptional needs to receive an education that meets their needs. The bill codifies and makes permanent what South Carolina has been doing by annual budget proviso the past few years. This new step gives certainty to the program so parents, students, and donors know it’s going to be there next year and the year after without fail. Currently, the program exists as a tax credit capped at $11 million annually. Throughout this process, we learned of additional donors above the $11 million level who have expressed interest in participating in the program. 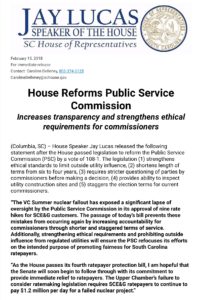 On Thursday, the House passed legislation to reform the Public Service Commission (PSC) by a vote of 108-1. The legislation (1) strengthens ethical standards to limit outside utility influence, (2) requires stricter questioning of parties by commissioners before making a decision, (3) provides ability to inspect utility construction sites and (4) staggers the election terms for current commissioners.   The PSC is the agency authorized by the legislature to regulate utility companies and set power rates. Indeed, the PSC is also the entity responsible for approving nine SCE&G rate increase adjustments used to fund the VC Summer project. The reforms adopted by the House this week give the PSC a more defined role with the goal of preventing another massive debacle in the future.
Thank you for the privilege of serving you in Columbia. If I can ever be of assistance to you, or if you have ideas on issues you want me to share with the rest of the General Assembly, please don’t hesitate to contact me.